In this quick start guide you will learn about barebench and its basic functionality. After finishing it, you will be able to to understand and modify the existing examples.

barebench provides you with quick insights about the runtime of given functions on a certain embedded target. Traditionally, to accomplish this requires several time-consuming steps:

With barebench, you only have to define the problem. All other steps are handled automatically. You do not need debug/trace hardware, nor you need the embedded targets you want to test for.

Most importantly, there is no simulation involved to compute the results. All benchmarks are run on the chosen physical target.

To make you familiar with the interface, we will start by loading an example project to experiment with. 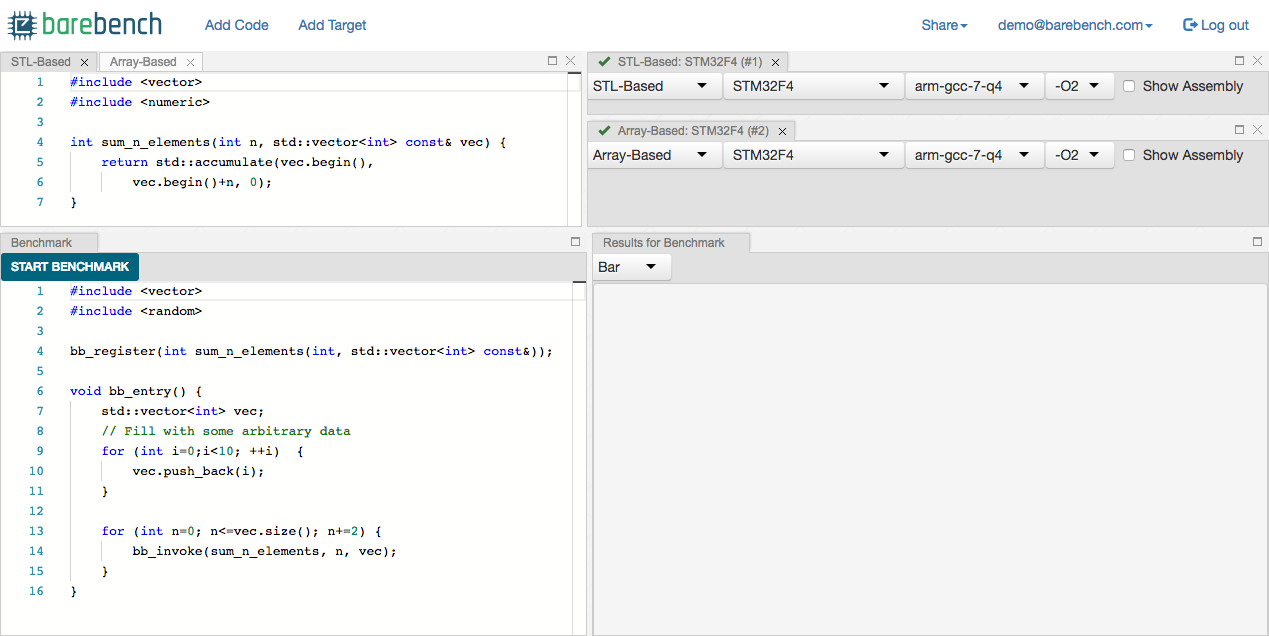 View after the example is loaded.

The view you see is separated into 4 major areas.

This example compares different implementations for a function to calculate the sum of a vectors elements.

You see that there are 2 code editors open. One implements the function using a traditional for-loop approach. The other uses a STL algorithm to accomplish the same. Which one is faster?

To compare them, there is one configuration for each function. Both benchmarks are specified to run on the same target (STM32F4) using the same compiler and optimisation settings.

A look into the benchmark editor reveals how these functions will be called:

First a vector with 10 sample values is created. The bb_invoke is responsible for invoking the function with the given arguments and measuring its runtime. In this example, the function should be evaluated always for the same vector, with an input range (argument n) ranging from 0 to 10 and step size 2.

A click on Start Benchmark will run this same benchmark against the 2 implementations (given in the configuration). A look into the results reveals, that both functions require almost the same amount of cycles for each set of arguments.

This picture changes quite a bit, when you modify the configurations.

With no optimisation enabled, the STL-based version is slower by a factor of about 4.

This guide showed you the basic functionality. We suggest you experiment a bit with the examples. You may then proceed to write your own benchmarks from scratch.